It is now the 31st December and definitely my last blog post of 2021. Unfortunately, the weather where I live on the South Coast of England has rained for most of the past month and although I managed a first road test a few weeks ago, it has not been possible to continue testing.

The first road test was reasonably successful. Various "issues" arose but nothing that could not be easily remedied. There are a couple of videos, shown below and taken by my buddy Ian, warming up the engine and a few adjustments prior to the road test:


and then the first foray up and down my road.


This highlighted a few problems that would need fixing; in no particular order:

4)   It’s a bit loud (!!) and mufflers are needed to take the “crack” out of the exhausts if I’m going to avoid unwanted attention from Mr Plod (a good friend of mine in Japan has just asked me who Mr Plod is..... he is a fictional policeman in childrens books in the UK - this short movie give the general flavour).

I had been making continual adjustments to the clutch prior to the road test and simply assumed it was all the new components bedding in. This was not the case and when I stripped the clutch I found that the entire clutch basket + bearing was about to fall off the back of the clutch inner. Why? Well, there was a fundamental design flaw in my clutch – easily remedied but could have been catastrophic.

I had made the clutch with a backplate that was fixed to the clutch basket with 3x ¼” set screws that was intended to both keep out road dirt and to prevent any axial movement between the bearing and the basket, shown in the picture below with the backplate removed. 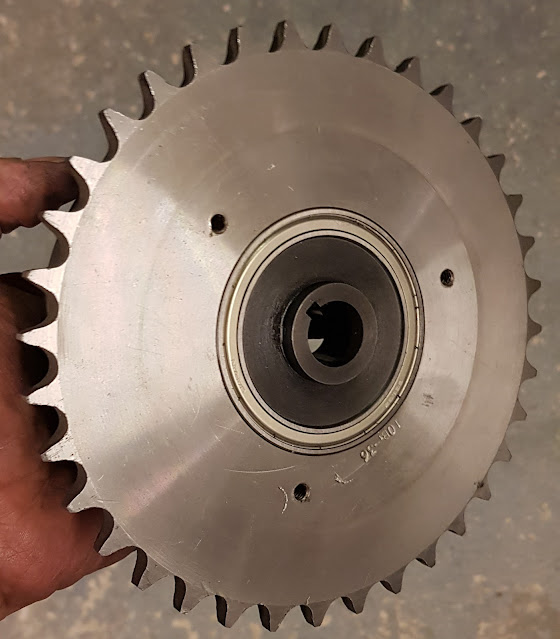 Whilst the backplate successfully prevented any movement between the bearing outer and the basket I had not provided any means of preventing movement between the clutch centre and the bearing inner. A consequence of this was that the pressure from the clutch springs was forcing the basket + bearing away from the inner towards the final drive chain.

A straightforward modification was to tap 3 additional holes in the clutch inner and attach a second backplate as shown below. 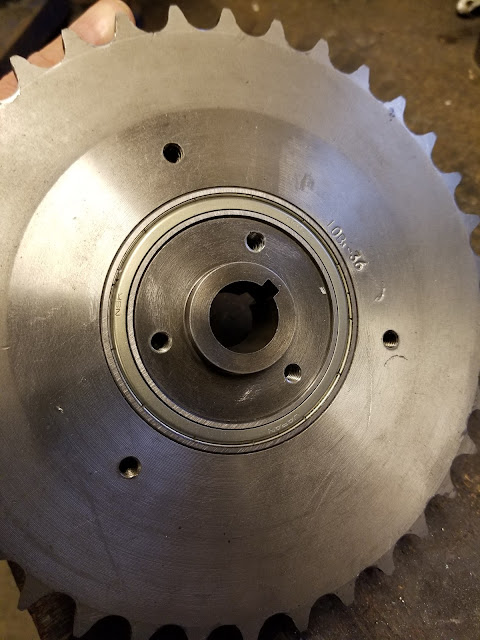 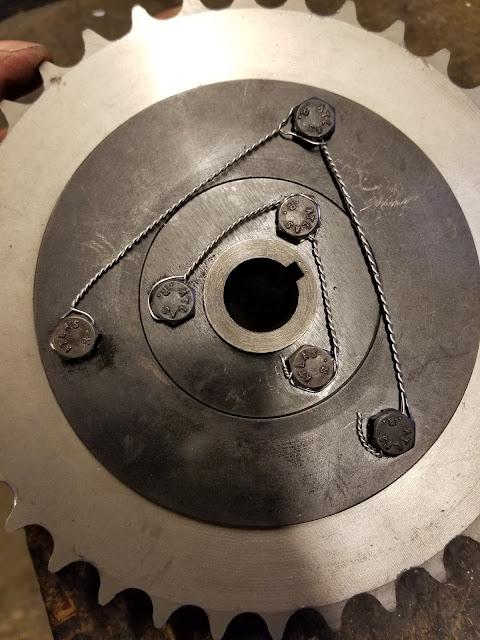 I have also now lockwired the set screws as the consequence of any of these coming lose would have a bad outcome.

It took me some time to sort out the cambox oiling on the AJcette and I have been expecting the same issues on the V-Twin – but worse because of the +/- 25 degrees of the cylinders. It had already become apparent that I needed to dump most of the oil from the oil pump into the crankcase to reduce the pressure upstream of the cambox flow restrictors but the 0 – 80 psi pressure gauge that I had fitted was now nearly useless as it needed to operate at around 5 psi. The pressure gauge was therefore changed to one giving 30 psi Full Scale Deflection. 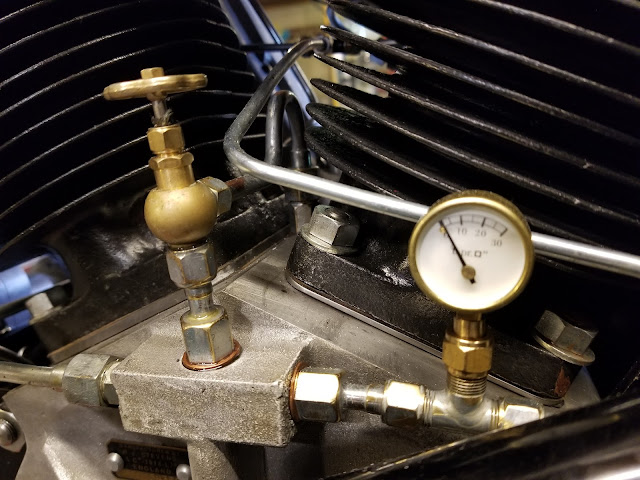 As the pump can easily deliver more than 60 psi oil pressure I will have to be careful never to close the dump valve too far to avoid damaging the pressure gauge. Although 5 psi is still close to the bottom of the measurement range at least I can now see the needle move away from zero.

The other and more significant modification is that the rear cylinder oil drain that previously connected one of the cambox oil gutters to the inlet valve/guide, shown in the picture below 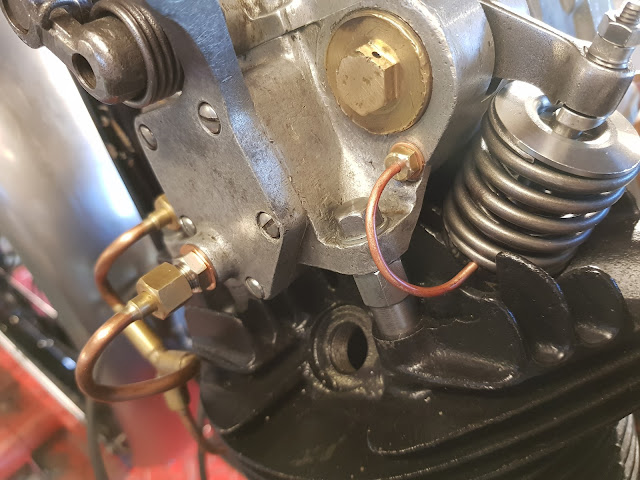 has now been connected with the oil drain pipes from the other cambox gutters to feed into the rear cylinder cambox scavenge pump. 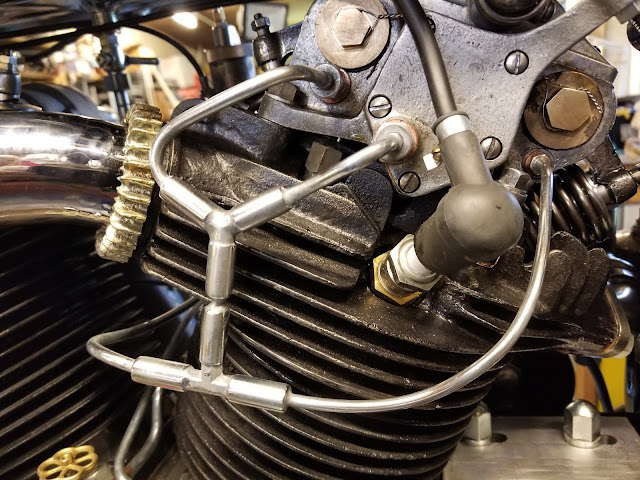 I am hoping that this will positively scavenge the excess oil that currently cascades out of the slot for the inlet tappet in the cambox.

The Royal Enfield rear hub that I have fitted to the AJS was used on a number of bikes in the 1920, most notably Nortons and Broughs. Two of my Model 18 Nortons have this hub (the 1928 and the 1929) and the brake on both is excellent and I had no reason to think that the one fitted to this bike would be any different. However, on its brief first foray up and down the road I had difficulty in stopping and it was clear that a bit of attention was needed.

I re-examined the setup that I had put on the 1928 Norton and concluded that the AJS did not have sufficient leverage as a result of using a brake arm that was too long. The one that I had fitted was an eBay item from a BSA C15 and so another was bought and fitted with the distance between centres reduced from 3” to 2”, seen below. 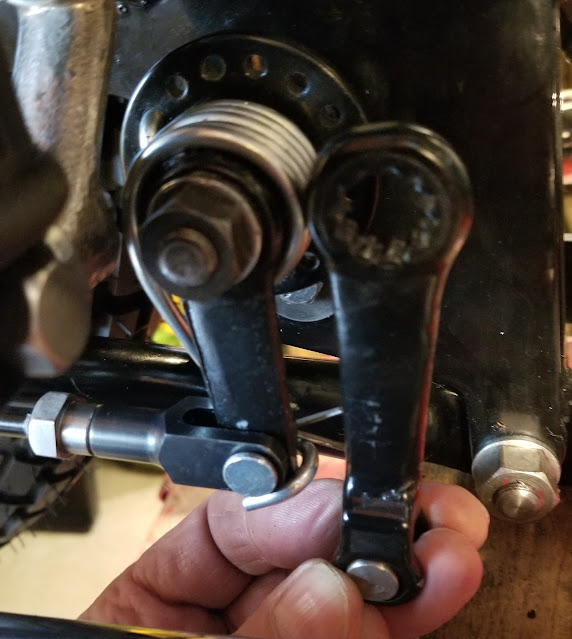 This, together with a positive stop for the brake made to fit on the brake rod 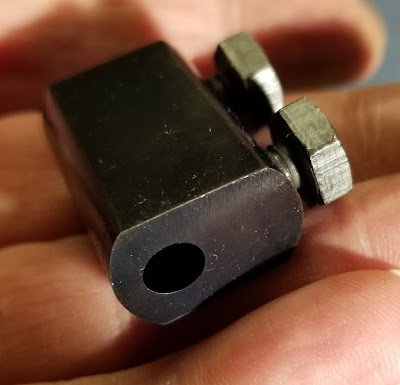 I don’t really want to attract undue attention when riding the bike and, although I can avoid riding through built-up areas, with open exhausts it is really a bit too loud for road use.

I run with a straight pipe on a number of my other vintage bikes and the easiest way to make them (nearly) acceptably quiet without changing the appearance is to weld a clamp to an exhaust muffler and insert that into the end of the pipe.

It is painted black because, although the clamp itself is made of stainless steel, the muffler is mild steel and would otherwise quickly go rusty after welding.

The muffler, shown in the picture below together with the brake stop, can be inserted/removed in about 20 seconds 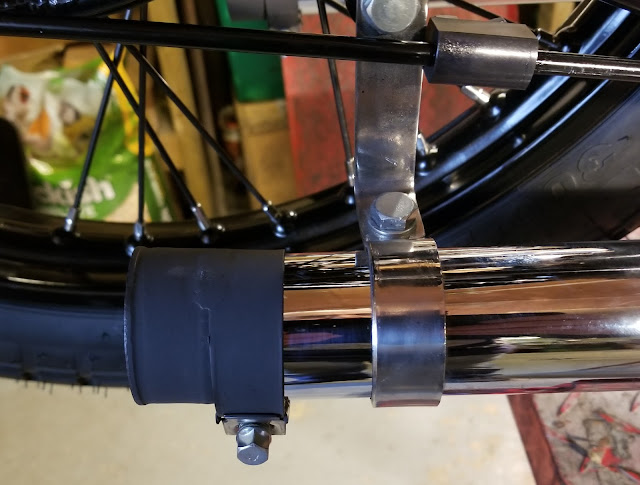 In the meantime, there are plenty of other things to get on with in the workshop. I have just done one job that I had put off for a long time, namely recommissioning a Velocette Thruxton that I restored many years ago and then dumped in the garage because it lost compression; it still has a UK Road Tax disk from 2011!

After stripping the top-end of the engine it was clear that there was too much piston/bore clearance and, as the barrel was on the upper limit of rebores I fitted a new barrel and piston from Grove Classics.

I had been using a Mk 2 Amal Concentric on the bike and as I had acquired the correct 1 3/8” Amal T5GP2 carburettor in the intervening years, decided that I would fit that at the same time. After fitting the correct slide and jets and a remote Type 510 Matchbox Float Chamber (the fuel level has to be set precisely with the carburettor using this type of float chamber – it’s hidden on the other side of the carb in the picture below) 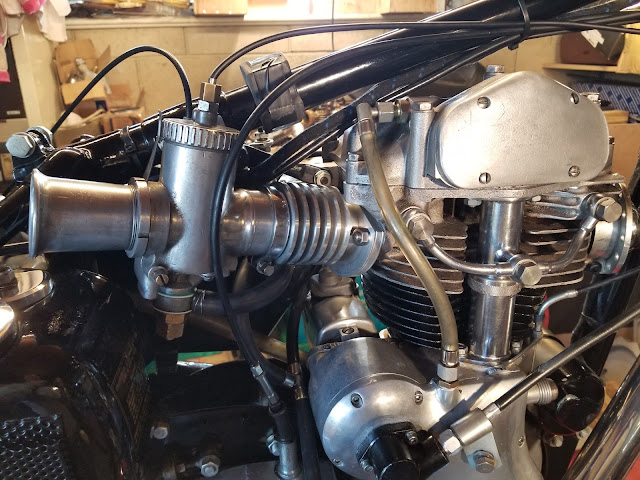 and some other basic recommissioning the bike was ready for its first start after more than 10 years.

I’m pleased to report that it started first time on the rollers and sounded pretty good; plenty of compression, as one would expect with a new barrel and piston, and very responsive on the throttle. And so I now have 2 bikes waiting for better weather for road testing.

And so, what to do in the workshop for the rest of the winter? As I believe I mentioned in a previous blog I have plenty (too many?) more project bikes awaiting restoration – 5 early cammy Velos, including KTT 55 and KTT 305, a 1933 AJS OHC 33/7 Trophy model and 2x early AJS Big Ports. I acquired these during my working life for my retirement; the challenge now is to live long enough to get them done!

Anyway, I’ve decided that my next project will be to bring the AJS 33/7 back to life and it’s already up on the bench for a first assessment. 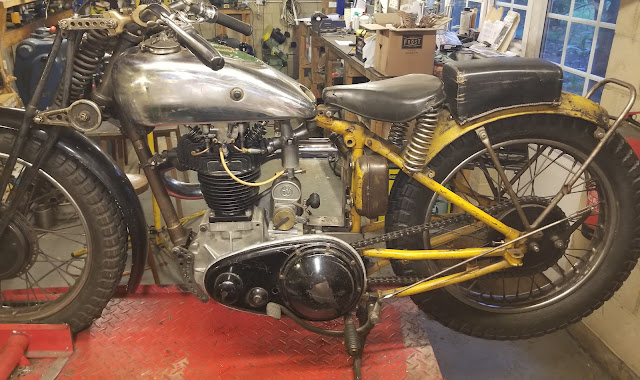 I’ll start reporting on this restoration in the New Year. In the meantime, I wish everyone that reads my blog a Happy and Safe 2022
Vintage AJS at 10:32
Share